I haven't gotten to see Joe Russo's Almost Dead (JRAD) yet.  I hope that changes with Lockn', if not before.  Frankly I had never really paid any attention to them until they were included in the initial Lockn' lineup announcement.  Recently I've been listening to JRAD a lot and have been continually impressed.

JRAD is not your average cover band. They are a veritable all-star supergroup bringing new life into this music in a way that even the officially-sanctioned Dead and Company doesn't do.  Here are three - and maybe four - areas that set them apart. 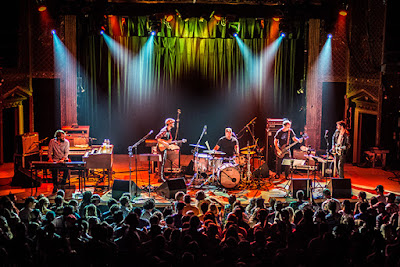 Credibility
The members of Joe Russo's Almost Dead all come from successful pre-existing musical projects.  Joe Russo and Marco Benevento were The Duo - an instrumental jazz/rock duo with a strong indie following.  Benevento has since gone on to front his own trio while Russo was picked up to drum for Grateful Dead members Bob Weir and Phil Lesh in Furthur.  Guitarist/Jerry-vocals Tom Hamilton is the creative force behind American Babies, one of the top emerging rock bands.  Guitarist/Bobby-vocals Scott Metzger has been a member of Rana and Particle, and is currently part of the guitar trio WOLF!  Bassist Dave Dreiwitz is of course the bassist for Ween - an American institution in its own right.

Being songwriters, composers and contributing members to these other creative outlets ensures that each member brings a unique perspective to the tribute band format.  Ultimately, JRAD is just a fun, mortgage-paying outlet for these guys, and the fact that it is not an end-all be-all musical occupation affords them a looseness that is one of the band's most appealing characteristics.  JRAD would be a great band no matter what music they were playing.


Led By Drums and Keyboards
Arguably the two most musically talented individuals in The Grateful Dead were lead-guitarist Jerry Garcia and bassist Phil Lesh.  With apologies to Bob Weir - the greatest rhythm guitarist of all time - Jerry and Phil's boundless creativity and sense of adventure were the driving force behind the Grateful Dead's musical superiority.  There were times when drummer Bill Kreutzmann played a bigger than expected role (check out the Grateful Dead Movie bonus footage) but being paired with 2nd drummer Mickey Hart for most of their run inhibited his fluidity.

In JRAD the foundation stems from the deep connection between keyboardist Marco Benevento and drummer Joe Russo.  The confidence and musical palette that these two draw from has a greater impact than guitar and bass in this interpretation of the music.  That said, JRAD is a true democracy where all members contribute to the creativity.

Improvisation and Risk Taking
Joe Russo's Almost Dead might primarily play the music of The Grateful Dead, but in between the lyrics and written parts JRAD improvises like a completely original ensemble and isn't afraid to take it waaaaaaaay out there.  Their jams almost always retain a semblance of "Deadness" even while venturing into waters that The Dead never swam.

Years ago Phish fans came up with a term called Type II jamming to describe moments when their beloved band leaves behind the structure of the song in favor of completely improvised music making.  JRAD often goes Type II multiple times each set.  In these moments of psychedelic sorcery JRAD can sound like some heretofore unheard of combination of '74 Dead, '97 Phish and Pangea/Agharta Miles - an osmosis of collective influences that also relies on sharp listening skills and a willingness to believe that magic can happen if you let it.


BONUS:  Song Delivery
Besides being the best guitarist of all time, Jerry Garcia is without a doubt one of the best vocalists of all time. Granted my standards are much different than an American Idol point of view but as far as I'm concerned Jerry was a great interpreter of songs, whether these were his own pieces co-written with lyricist Robert Hunter, or a Dylan song, or even something from the Great American songbook such as Irving Berlin's Russian Lullaby.  Anyway, the way Tom Hamilton pours himself into these Jerry Garcia numbers is starting to take on a broken quality of its own.  It's the same familiar songs coming from a comforting voice -- sung with a different perspective.  No other Dead tribute band does it so well and so singular.

It's not all Tommy Hamilton on vocals though.  Having a force like Scott Metzger at the ready for the Bob Weir songs gives JRAD sets the back-and-forth of a classic Jerry/Bob duel.  Metzger can really sound like Bobby when he wants to, while Hamilton "sounds like Jerry" by not sounding like Jerry.  It's more of an attitude in his case.

There you go.  It might be stupid to write this much text about a tribute band, but in a time when cover bands are a dime a dozen, JRAD is light-years ahead of most tribute bands.  If JRAD did a whole album of original material and started working these songs into their shows, and/or bringing in content from their other projects, I doubt anyone would complain so long as these arrangements retained the JRAD thumbprint.


Email ThisBlogThis!Share to TwitterShare to FacebookShare to Pinterest
Be a Fan
Posted by Tanner Llewellyn at 4:53 PM