For the last couple years a lot of my time spent playing music was spent playing Irish traditional music: instrumental jigs, reels, hornpipes and such. Although recently I've temporarily drifted away from that repertoire it still has an impact every time I pick up my tenor banjo and pluck a tune.

Here are five ways Irish music continues to influence me:

1) It's All About The Melody
I love how in Irish trad if you play a melody instrument you play the melody all the time in unison with others.  You never have to comp or take a solo.  There is some variation and improvisation but it's minimal - you pretty much just stick to the melody and structure of the tune as it keeps repeating.

This mindset of repeatedly playing the melody has carried over into everything I play.  It's basically the same as using an instrument to whistle.  I try and find songs with good melodies and then just play those melody lines as instrumental tunes.

2) Dispense With The Chords
Harmony plays a big role in most music but in Irish traditional music it matters not as much.  When a jazz horn player plays a standard, he is conscious of the chord of the moment and that informs his note choices during a solo.  As a melody player in Irish music you don't really need to be aware of the underlying chords in this way since the tune is the tune and the chords are secondary or arbitrary.  You can be aware to the extent that you add harmony like double stops at certain places but those selections are often optional and variable.

Irish music has given me the confidence to use this same "chordless" approach no matter what I am playing.

3) Modes, Modes, Modes
My own theories toward music theory have been helped along by my experience playing Irish music.  I realized quite early on that the "modal" and/or "minor" tunes common to the Irish session repertoire (tunes in E-Dorian, A-Dorian, D-Mixolydian, A-Mixolydian, B-Aeolian, E-Aeolian) are all melodies comprise of notes from either the D-major or G-major scales, but resolving to a tonal center other than the "1" of those major scales.

Because of this awareness which stemmed from Irish music, I now analyze almost any melody I am learning in terms of the major scale - even if the mode being used is Dorian, Phrygian, Lydian, Mixolydian, or Aeolian.  When you analyze melodies in terms of the universal major scale patterns start to show up and you understand that "sharp" or "flat" note only occurs when it is truly sharp or flat!  This way of thinking also makes it easier to play the same melody in other keys since the major scale is universal.  Being a Dorian tune, Cooley's Reel is always going center around note 2 of the major scale.  It's normally played in E-Dorian, which is the D-major scale, but if you wanted to play Cooley's in G-Dorian you would simply transfer every note to the F-major scale. 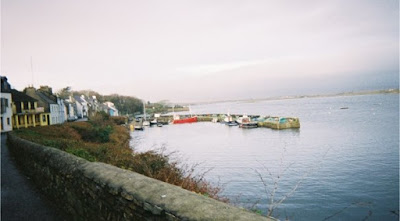 4) Music Doesn't Need An Audience
People who play Irish music are going to play whether there's an audience or not!  A jig or reel is musically complete when one person is playing it on a fiddle, even if there's nobody else around to hear it!  I do realize that Irish music stems to a type of dancing which suggests the speed and rhythm that a tune should be played at and that Irish sessions are social in nature.  But musically these traditional dance pieces do not require full band arrangements or dancers.

This lack of a need for an audience is contrary to the way we're conditioned to think about music.  What rock band practices without some aspect of entertainment or performance or getting a gig being taken into account?  Yes you can play music for fun as a hobby without having to have performance or entertainment as the ultimate driver.

5) My Instrument Of Choice
I love to play tenor banjo.  More specifically, I love to flat-pick or pluck melodies on tenor banjo. I don't really believe in genre or style when I'm playing something.  I don't really care where the piece came from or what kind of tune or song it is supposed to be.  I just like using a tenor banjo to sound out a melody.

It just so happens that there's a whole genre of music where people flat-pick melodies on tenor banjo and it's called Irish traditional music!  Being able to hear masters like Angelina Carberry and John Carty play tenor banjo in this way really helps.  I know what the sound of a flat-picked tenor banjo by an expert musician should sound like thanks to these Irish banjo players.  I may not want to always play tunes of Irish origin on tenor banjo but without that connection I don't know that I would have made that leap to the instrument at all.


Email ThisBlogThis!Share to TwitterShare to FacebookShare to Pinterest
Be a Fan
Posted by Tanner Llewellyn at 10:41 AM