My biggest takeaway thus far from David Reed's Improvise for Real (IFR) book is an unexpected one - the additional amount of fun that it's brought to playing an instrument!  Don't get me wrong, I enjoyed playing already, but Reed's method has added a new dimension to this practice.  A freer way.  A more complete understanding.  A doorway toward expression. 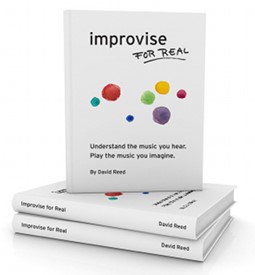 IFR is not instrument-specific and it's surprisingly non-technical, but it'll quickly have you performing things that are much more complex than they seem.  Some of the ways he looks at music seem revolutionary, yet at the same time it echoes and confirms an awareness I had already been cultivating on my own, while putting it into more concise, coherent terms.

His book contains simple exercises that have infinite potential.  Exercises that give you permission to experiment, to see what the possibilities are, to take risks, to just have fun.  You will get to know your instrument.  The way I interpret Reed's teachings blurs the line between practice and playing.  It has increased my desire to pick up my banjo every day and try something new.

The other thing I've realized from working with Improvise for Real is that it's not about the rush to get better or be in any kind of hurry at all.  It's about enjoying the moment.  I do feel like it is teaching me how to be a better musician.  More importantly, IFR has given me the power to create music now - right now - instead of waiting for some future time when I'm good enough.

###
Email ThisBlogThis!Share to TwitterShare to FacebookShare to Pinterest
Be a Fan
Posted by Tanner Llewellyn at 7:40 PM