I don't do many travel posts, or non-music related posts anymore, but it's always fun to provide a synopsis of a cool place.  Having just spent 10 days in Quebec City, I feel the need to write something about it!

Here's a rundown of the best pubs, restaurants, and attractions.  I'll start with the most important things first - breweries and dive bars!

BEST BREWERIES
Corsaire Microbrasserie - Located across the St. Lawrence river in sister-city Lévis, this brewery/restaurant is a short and easy ferry ride from Quebec City.  Step off the ferry, walk to the street, turn right, walk a bit more and the brewery is right there - perfectly located to take in views of Chateau Frontenac and other QC sights from its outdoor deck.  Much to my approval, Corsaire seems to specialize in English style malty beers, bucking the trends toward super-hoppy and Belgian brews.  Their Davy Jones Stout ranks among the best stouts (or beers) I have ever had.  It resembled a Guinness but had much more to offer. 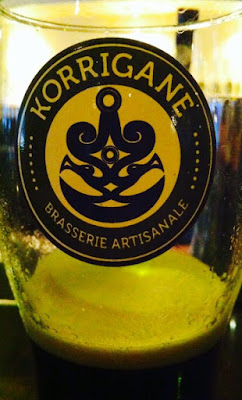 Brasserie la Korrigane - Don't let the upscale décor fool you, this place is serious about their beers!  Also don't let the sometimes "fruity" descriptions throw you off.  The blueberry in their Emily Carter blueberry beer is so subtle it'll have you asking for seconds.  Korrigane is in St. Roch - a hip, developing part of town that lies outside the walls of old Quebec, but is within walking distance (or an Uber cab if you're tired).  The food menu is also quite inventive at Korrigane.  We shared some excellent wings and artisinal poutine.  My favorite Korrigane beer was The Kraken!

BEST PUBS (DIVE BARS)
Le Bateau de Nuit - Probably one of the best bars of all-time, this place is easy to miss. It's on rue Saint-Jean, a street already loaded with bars and restaurants, both inside the St. Jean gate and out.  You have to walk a few blocks up Saint Jean to get there, beyond where most tourists venture, but it's worth it.  Look for the green door at 275 rue Saint-Jean and walk up the stairs to enter a beer lover's haven. There's blues, jazz or heavy metal music playing on the speakers, a friendly, knowledgeable, and generous bartender, trippy things to look at and a selective assortment of the finest beers.  Despite its esteemed reputation as a world-class dive bar, you probably won't see any other tourists in Le Bateau de Nuit, thus helping to maintain that very reputation.  Don't be scared to enter, but leave at your own risk. Cash only.
Bar Ste-Angèle - The above mentioned places are all outside the walled old city of Quebec, so you have to be somewhat adventurous to even want to check them out.  However, Bar Ste-Angèle is located right in the thick of it (albeit on a side street, with very little signage, with late opening hours, so no one seems to know about it, and they seem to like it that way).  Bar Ste-Angèle is not just a refuge from the swarms of people in that part of town (this gets old after a while), it's also a refuge from jacked up prices.  There aren't any $14 cocktails here...unless you mean a pitcher of rum punch.  Bar Ste-Angèle has the old Hollywood feel of a run down cocktail bar in Los Angeles; not something you would expect in quaint Quebec City.  I recommend visiting after 10pm on a Friday or Saturday when they have live jazz bands playing (real jazz - none of that dinner music stuff).  It actually might be a little crowded with locals on those nights, but you'll be among friends.

Honorable Mention - Pub Nelligan's, 789 côte Sainte-Geneviève.  Hippie-ish crowd (or what passes for hippie in QC), and a traditional music session every Tuesday night.  What more could you ask for?!

BEST RESTAURANTS
Le Hobbit - Hobbit Bistro was recommended to us by our Air BnB host Frederick, so we went there for breakfast (petit dejeuner) on our first morning in Quebec.  It was amazing!  We went back for dinner another night.  Hobbit offers gourmet food at bistro prices.  The food is modern, innovative, and well-crafted.  Stop there for dinner on your way to Bateau de Nuit or head there for breakfast.  They open early.  Great coffee!
Portofino - The burgeoning foodie in me says that I should pick something more edgy, but this fine Italian restaurant in the heart of old Quebec City really hit the spot.  We went for lunch and had wine, soup, pasta and a post-meal coffee.  It was perfect!  At night they set out tables and you can dine on the sidewalk (as most places do on a nice evening in this area).  Portofino is well positioned for lingering and people watching.  This would be a good place to splurge for dinner.

BEST COFFEE SHOP
Excellent espressos, cafè au lait and lattes are easy to come by in Quebec and by no means did we even begin to explore it all, but our favorite spot - our "local" - was Chez Temporel...a quiet, no nonsense cafè right around the corner from the apartment we stayed in.  It's just far enough off the beaten path that it felt like the place to be on any given morning.  As I mentioned earlier, Le Hobbit wasn't bad either.  Order a latte by the bowl and savor the goodness! 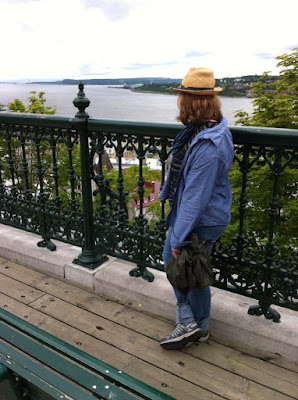 BEST EXCURSIONS
St. Lawrence River Cruise - This 90 minute maritime excursion on the AML Louis-Jolliet costs less than you might think.  About $34 at the time of this writing.  There's a costumed interpreter on board full of historical nuggets (not as cheesy as it seems), and the sightseeing is awesome.  Not only are there great views of the city, but you also get to see Montmorency Falls, which I am happy to tell you are taller than Niagara Falls.  This cruise is a pretty common thing to do - this isn't some hush-hush tip - but it's still worth doing.  There's a full restaurant and bar on the boat.  It was a lot of fun.  Be prepared for wind if you plan on staying on deck instead of inside the climate controlled area.
Bicycling on Île d’Orléans - OK, get this: there's a rural island in the middle of the St. Lawrence River less than 20 miles from Quebec City.  And it's loaded with orchards, strawberry fields, cideries and wineries!  I didn't even know about this island or the opportunity to rent bikes and visit it until past mid-way through our trip, but I'm so glad we spontaneously did this!  How it works is you make a reservation with the Ecolocycle location at the farmer's market in Quebec City, then you show up at 9:45am on your chosen day and they have a taxi shuttle you over to their shop on Île d’Orléans.  There, you are fitted with a bicycle, helmet, lock and given suggested itineraries and even a tutorial if needed.  You have the next 6-and-a-half hours to explore the island on your own before the taxi comes back to pick you up at 5pm.  Île d’Orléans is over 70 miles in circumference, but there are shorter routes.  Heck, you can do like we did and stop at pretty much every winery or cidery you come to.  They all seem to have outdoor decks or patios with incredible views of vineyards and the river, as seen in the pictures below.

BEST EXPERIENCES
Le Capitales de Quèbec (baseball). If you're in town while there's a game going on, definitely try and go.  It was one of the most fun baseball games I've ever been to.  The stadium is small enough that there's not a bad seat in the house.  Great atmosphere.  Everyone is in it together.  The fans really love their team, who play in the Candian-American Association of Professional Baseball (not affiliated with the MLB).  The stadium is located in the north end of St. Roch.  Some, but not all, could make the 1.6 mile walk from the city, but it's an easy cab ride.  The Capitales won the game we attended! 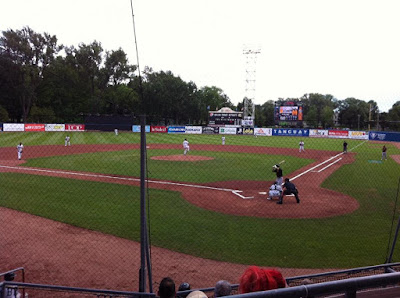 Ghost Tours of Quebec - Having recently attended a, shall I say, less than professional ghost tour in my home town, I was pleasantly surprised by this very well done tour through Quebec City's murderous and spooky past.  Our guide and storyteller William Black knew his stuff.  It was interesting throughout, but perhaps not very scary until the grand finale when William took us into a haunted cathedral.  Maybe my eyes were playing tricks on me, but as he was talking I kept thinking I sensed shadowy people sitting above us. It was weird and creepy and I'm a total skeptic, so who knows.  I was glad when we exited that building.
OTHER TOURISTY THINGS
-Take a tour of the Citadelle.
-Walk along the walls of the Fortifications of Quebec National Historic Site.
-Visit the expansive Terrasse Dufferin.  Continue onto the Governors Promenade up to the Plains of Abraham Battlefield Park.
-Don't just take pictures of the Chateau Frontenac, go inside and have a drink in their super swanky wine and cheese bar.
-Test your stamina by walking up and/or down the Cap-Blanc Stairway (392 steps!).
-Take the Ferry to Lévis, hop off, then hop back on.  You'll be super cool if you do.  You'll be even cooler if you take the time to down a few pints at Corsaire Microbrasserie while in Lévis.
-There's a ton of statues, monuments and history that you can learn about on your own! 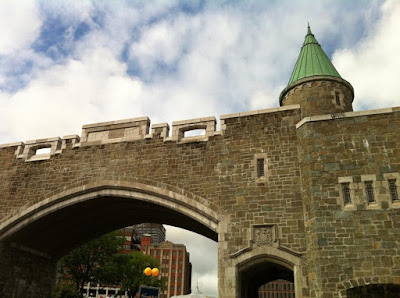 FINAL NOTES
Bring your walking shoes. Quebec City was the most physically demanding vacation destination I think I have ever visited. We did miles upon miles of walking up and down hilly streets and stairs, not to mention the bicycle excursion that was tacked on at the last minute.  We pretty much stayed in a state of self-induced exhaustion the whole trip.  I definitely left in better shape than when I got there, even with all the beer drinking and poutine eating.

For a relatively large, happening city, it gets extremely quiet at night.  We stayed about a block and a half off the main drag in a small neighborhood known as the Latin Quarter of Quebec City, and it was incredibly quiet at night (at most times of the day, actually).  It was you could hear a pin drop quiet.  It felt really safe and secure.  I liked that about it. 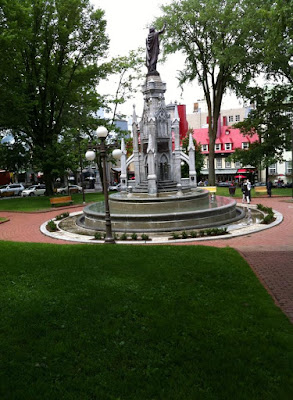 The people are friendly, but try and learn some French.  I had good intentions of learning French before going, but really slacked off.  Upon arriving it became apparent that I didn't know jack shit, but that was OK because pretty much everyone in the city is in the service industry and speaks English in addition to French.  But a few random words and phrases were appreciated, I think.  There was none of the stereotypical French snobbery from the Quebec locals.  It was like you had all the best European characteristics - culture, art, cuisine - mixed with all the best Canadian traits - extreme friendliness and hospitality. 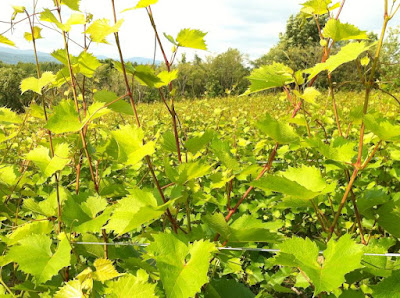 
Email ThisBlogThis!Share to TwitterShare to FacebookShare to Pinterest
Be a Fan
Posted by Tanner Llewellyn at 10:39 PM