Some Thoughts on Musical Improvisation 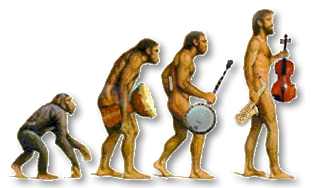 I had to make a conscious effort to learn Irish music.  I had to initiate the conversation with it - as an art form not as a folk art.  I've only just begun this endeavor, really.  On the one hand it's a very specific medium with a very deep well of collective human consciousness at its core.  On a lighter note, Irish music has served as a gateway toward the act of simply playing notes on an instrument, which is something I might never have done without it.

The music I've always been drawn to as a listener is improvisational music.  There is some improvisation - AKA "self expression" - to be found in Irish music, but traditionally it stays within a fairly confined melodic structure.  The kind of improv I'm talking about is of a more open, unstructured variety.

The on-demand commercialized way we hear and consume music - on our smart phones, on Spotify, in a TV show, or movie or advertisement - is a recent phenomenon.  The music that makes it to the top of these queues is the stuff that's the easiest to digest; dumbed down to a point of easy comprehension for those needing to be impressed and entertained.

It used to be that the only music anyone ever heard was made live on the spot.  I want to get back to that earlier connection, that closeness, that people had with music.  And when you think about it , improvised music had to have been the first type of music.  It wasn't analyzed or codified until long after it was created.


Improvised music is free -- free of the restrictions of style, idiom or prescription.  Anyone can do it without even thinking about it, but I kinda want to study it, which is why I might start taking some lessons on improvisation.

In the meantime, bang on a can / pluck a string.  See what notes and tones want to be heard today.

Email ThisBlogThis!Share to TwitterShare to FacebookShare to Pinterest
Be a Fan
Posted by Tanner Llewellyn at 6:42 PM