Ten Books That Changed Your Life

There was something being shared on Facebook a few weeks back about Ten Books That Changed Your Life.  I'm not sure what the real point behind that is, but it got me thinking of assembling a similar list.

I'm currently into books that I can relate back to the learning of music.  This past May I read Natalie Goldberg's Writing Down the Bones, which I definitely applied to music.  Last month I read A Mind For Numbers by Barbara Oakley, which is helping me learn how to learn, and now I've just started Fluent in 3 Months by Irish polyglot Benny Lewis.  In his book, Benny describes how anyone at any age can learn to speak any language from anywhere in the world.  Music is a language too, you know, yet I do have a newfound interest in learning Canadian French (Francais Quebecois)!

Those examples are all recently read books.  Hard to tell how these will resonate ten years from now.  But, looking farther back I can think of several books that have had significant impacts on my life.

In my very early 20's I read Paul Auster's New York Trilogy.  Not long after that I read Haruki Murakami's Hard-Boiled Wonderland at the End of the World.  Auster and Murakami opened my eyes to the surreal, experimental aspects of modern fiction.  I suppose Breakfast of Champions by Kurt Vonnegut also had a similar effect.  I recall very weird, synergistic and unexplainable things going through my mind and/or imagination as I read each of these books.  Some things in this world you just can't explain.

Then my trajectory backtracked slightly to the minimalist, blue collar short stories of Raymond Carver, as found in his book Cathedral.  Carver was a welcome relief.  Liking the realistic, alcohol-inspired short story, I came across Charles Bukowski's Hot Water Music which is a good place to start for a sampling of his gritty, easy-reading stories of drinking, women, gambling, writing and more drinking.  Being primarily a poet, Bukowski also opened my eyes to poetry, at least his dirty, Los Angeles roach-motel version of that medium.  I'm thinking of Bukowski's Love Is A Dog From Hell in particular.

By coincidence, or by fate, I then found another California poet -- Robinson Jeffers.  In Jeffers' poems I could relate to a perfect expression of my world view.  Here's a whole slew of Jeffers quotes that back this up.  The book I started with was The Selected Poetry of Robinson Jeffers, which is a good introduction to his work.

Around 1999 or 2000, while living in Colorado, I started an almost daily ritual of what can best be thought of as abstract journal writing.  With no premeditated ideas, I would randomly fill up a page per day with a constant flow of words, never stopping the pen or trying to be too aware of what I was writing.  If I caught myself thinking more than a couple words in advance I would purposely go in a different direction.  I kept this practice up for 3 or 4 years.  This is before I played music or blogged so it served as a primary creative outlet. 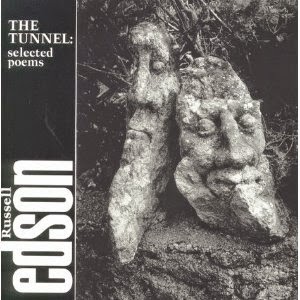 I mention this because earlier this summer, after discovering prose poet Russell Edson only days after his death, I was inspired to start doing this type of writing again, in much the same way as before.  The first time around I felt like I was acting completely on my own, but reading the classic The Tunnel: Selected Poems of Russell Edson has now provided a validation, if not a blueprint, for this type of writing.  This Russell Edson book has definitely changed my life.

I had never ventured outside the US until fall 2004 when I visited the west coast of Ireland.  I fell in love with the feckin' place, as well as international travel for travel's sake, and would return to Ireland in 2005, 2006 and 2009 before the increasing cost of flying there priced me out.  After that initial visit, I read the Irish travel book McCarthy's Bar by Pete McCarthy, which is still the best travelogue of its kind, further solidifying a love of Ireland and travel.

After visiting Ireland a couple times and developing an interest in that culture I decided to get a tenor banjo and learn to play Irish jigs and reels.  This first attempt at playing music has led me to this day.  It has also caused me to notice a connection between traditional tunes and folk tales.  I can appreciate the simplistic, weathered nature of traditional stories from Iceland, Jamaica and elsewhere.  However, Irish Fairy and Folk Tales edited and selected by W. B. Yeats is still my go-to source for this type of reading!

In 2007 I pulled a traveler's switcheroo and visited Scotland instead of Ireland.  My time in Scotland's Orkney Islands allowed me to become aware of writer George Mackay Brown who was born, lived and died in the little town of Stromness on the main island of Orkney, where we stayed.  Besides being one of the greatest British poets, Mackay Brown also wrote a weekly column in the Orcadian newspaper for over twenty years.  Not a lot goes on in Orkney, but Mackay had an uncanny gift for the mundane.  He considered his column "light reading for quiet townsfolk on a Thursday afternoon".  The collection Letters From Hamnavoe is the first of four volumes capturing this work.

I guess if I'm really being honest I should also list Watchers by Dean Koontz, which I read when I was 14 LOL.  As is my personality, I changed overnight from a kid who never almost never read books to a voracious reader whose goal was to read 100+ pages a night of everything from Steven King to Louis L'amour to Clive Cussler, to Sue Grafton to Raymond Chandler!

I don't read as many books cover to cover as I used to, and hardly any fiction any more, but the above list does provide a synopsis of the influential books and authors that come to mind this rainy evening in September.  If you share an interest in any of these books, or are checking some of these out, or have a list of your own to share, please add a comment or write to me directly!

Email ThisBlogThis!Share to TwitterShare to FacebookShare to Pinterest
Be a Fan
Posted by Tanner Llewellyn at 12:42 AM