I've just returned from a little over a week in the Los Feliz / Silver Lake area of Los Angeles.  Two distinct neighborhoods within walking distance of each other, Los Feliz and Silver Lake are both happening, bohemian enclaves that still feel isolated from the glitz and gaudiness of stereotypical LA.  To the West is Hollywood and the Hollywood Hills.  To the East is Echo Park and Atwater Village.  Along the North is the awesome Griffith Park and to the South is Downtown LA.  Although I had rented a car, I did most of my exploring on foot as this part of the city is very walkable and our cottage was equidistant to both Los Feliz and Silver Lake. 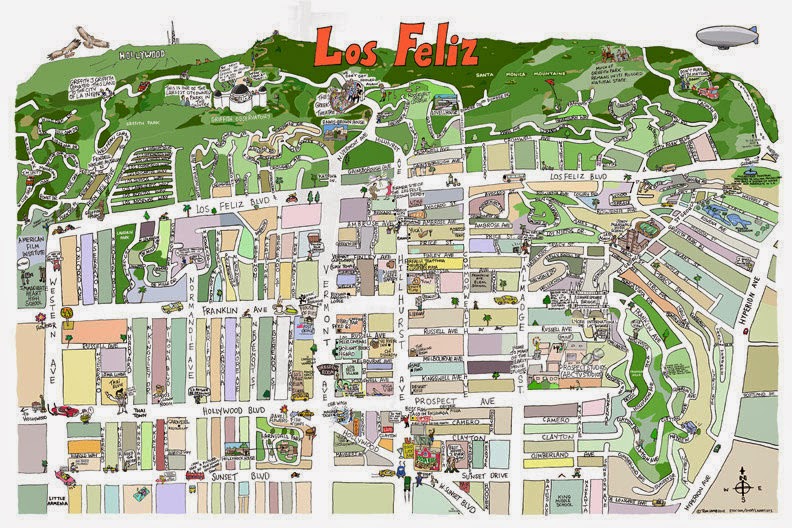 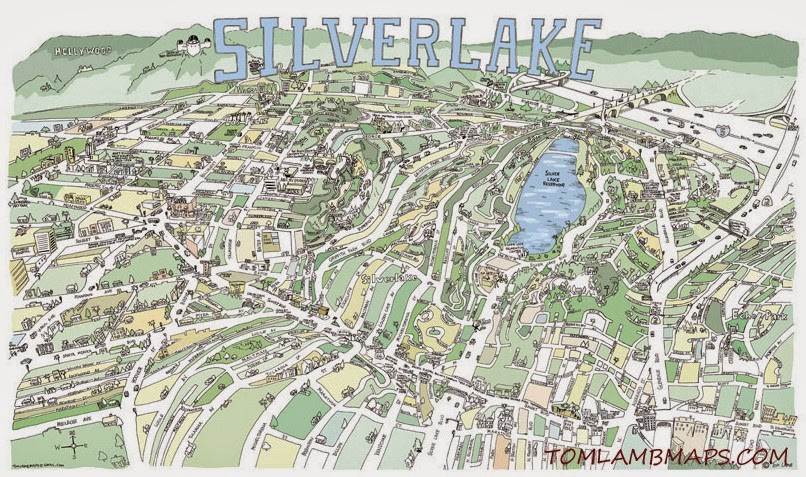 Los Feliz is an affluent, neat, tidy and safe feeling cross-section of hilly streets with a bustling little village area along Hillhurst and Vermont Avenues and some very nice homes as you start to climb up the stairways of the adjacent Franklin Hills.  Silver Lake is a bit crunchier and gentrified, but was recently named "America's Hippest Hipster Neighborhood" by Forbes Magazine.  The majority of Silver Lake's shops and dining options are clustered around the part known as Sunset Junction.

There are tons of restaurants, bars and coffee shops in these two neighborhoods and things are changing all the time.  This is only a small sample of the offerings from my experiences over a week spent there in late August 2014.

Breakfast
First things first.  You can't go wrong with Fred 62 (1850 N Vermont Ave), offering an extensive menu of breakfast staples - some with eclectic twists.  Open 24 hours.  Over in Silver Lake, the young and hip flock to Millie's Cafe (3524 Sunset Blvd) where you can sit outside on the sidewalk to see and be seen.  Much more than a diner, Millie's offers some killer huevos-centered specialties like the Machaca that'll keep you full for the better part of an afternoon.

Happy Hour
We wandered into the non-descript El Chavo (4441 Sunset Blvd) late one afternoon and were directed to the no nonsense back bar where drinks are cheap(er), the jukebox is free, and a Charles Bukowski vibe is in full effect.  Definitely not your prototypical LA...or is it?  El Chavo's El Tres Inn (located above the restaurant) seems like it might be a place worth staying on a future visit.

Dive Bar
The Drawing Room (1800 Hillhurst Ave) hands down.  This is the place to go if a Red Stripe or highball at 8am is your kind of thing.  Or at 8pm.  What's the difference?  Perhaps you'll see a celeb in there for the same ironic reasons as you.  The complete lack of windows only adds to its character.  Killer old school jukebox (5 plays for a dollar) where I programmed some Linda Rondstadt and Tom Petty.  (Note: I did not make it into Ye Rustic Inn across the street, but I heard good things about that dive as well.  Take your pick).
Cheap Eats
Tacos.  Tacos.  Tacos.  Whether you get them from Machos Tacos (1670 N Vermont Ave) at the corner of Vermont and Prospect, or at "Best Fish Taco in Ensenada" (1650 Hillhurst Ave), you can get a pretty tasty, filling meal and still have plenty of change back from your tenner.

Draft Beer
While I didn't stumble upon any nearby breweries, I did find a few places with some good craft beer selections, including:  Jay's Bar (4321 Sunset Blvd).  Jay's is too hip to be a dive bar, but it looks like it could be one from the outside.  Once you venture in you might be tempted to stay for hours sampling the local craft brews on draft. Spitz (1725 Hillhurst Ave) also has a well chosen selection of draft microbrews in a nice open air setting.  Good food too!  The German themed Red Lion Tavern (2366 Glendale Blvd) is sort of off the beaten track in Silver Lake, but well worth the visit if Black Lagers and Malty Ales are your thing.  Public House (1739 Vermont Ave) probably has the largest beer menu of any place I found, but it also has an over abundance of TVs and bad top 40 music playing, both negatives IMO.  To make those apsects more tolerable, we grabbed an upstairs table overlooking Vermont Ave and commandeered their internet jukebox to play some Ween, Dawes, Dr. Dog, and lots of Phish for a good 2+ hours.
Pizza
The only pizza I had in LA was at Garage Pizza (4339 1/2 Sunset Blvd), but it was perfecto!  Thin crust, New York style.  They are open late.

Coffee
H Coffee (1750 Hillhurst Ave) was my favorite place to get coffee and hang out.  Friendly staff.  Sprawling coffee house where you could sit for hours and read a book.  Another good coffee find was Casbah Cafe (3900 Sunset Blvd) in Silver Lake.  Relaxed atmosphere.  New agey, hippieish decor with hassocks and mismatched furniture.  Leafy, hidden alcoves for sitting outdoors.

Tropical Cocktails
The one and only place for tropical cocktails is The Good Luck Bar (1514 Hillhurst Ave), a local institution.  We went on a Monday night when the place was less crowded, which made it easier to take in the ambiance (and also went back on Wednesday!).  This place has it going on and the drinks are strong.  My advice is to savor one, or at most two, of their tropical cocktails and then head out because if you have any more you're gonna be feeling it the next day!
Outdoor Atmosphere
The charming restaurant Home (1760 Hillhurst) truly does have a homey, welcoming feel to it.  The outdoor seating area has an agreeable layout and you can kind of see the Grittith Observatory from there.  I got lunch at Home by myself one day and felt pretty comfortable doing so.  The young waitress even referred to me as "honey" and "sweetie" which is a plus.  Right next door to Home, the aforementioned H Coffee also has a hospitable outdoor atmosphere.

Juice Bar/Shakes/Smoothies
The hipster-friendly Punchbowl (4645 Melbourne Ave) takes the cake on this one.  Overly priced juice bars might seem like an LA cliche, but once you've forked over ten bucks for a Greena Colada at Punchbowl, you'll know why this place is for real.

Best Overall Food
The two best meals I had in LA were at the Red Lion Tavern (see draft beer above) and at Sidewalk Grill Mediterranean Kitchen (1727 N Vermont Ave). At Red Lion Tavern I had mouth watering Hungarian sausage, with delicious sauerkraut on the side, served with a pasta/cheese dish called spaetzle that might have been the best thing I've ever eaten!  I washed it all down with a Kostrizer Schwarzbier. At the Sidewalk Grill I had a chicken kebab cooked to perfection, with hummus, dolma (grape leaves stuffed with rice and seasoning) and Greek salad.  Yum! 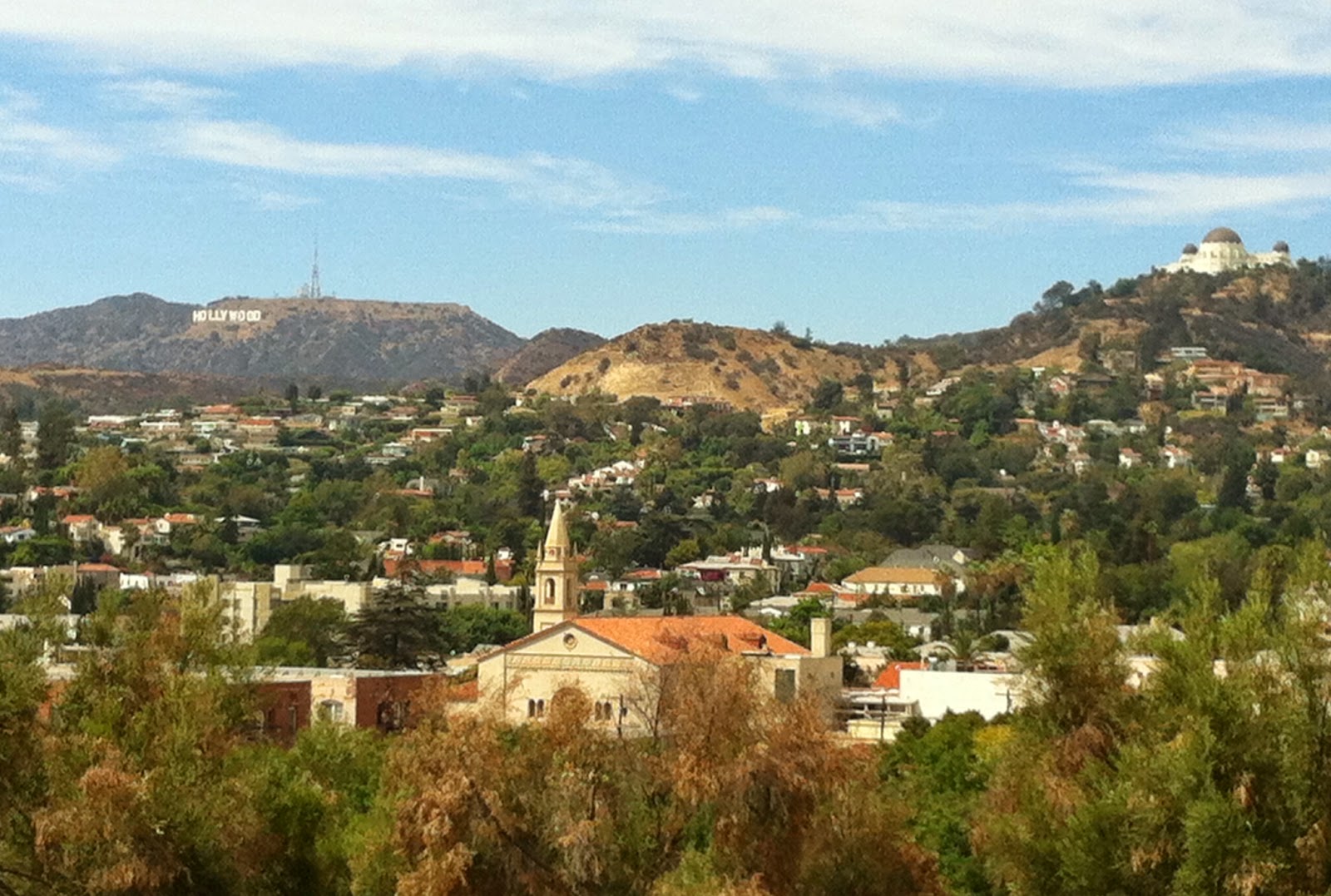 Noticeably absent from my list
I never made it to Little Dom's, one of the most well regarded restaurants in Los Feliz.  I also missed out on Blossom in Silver Lake and Alcove a little ways up Hillhurst, two other highly recommended restaurants.  Oh yeah.... and both times I tried to go to the famous Tiki Ti cocktail lounge they were closed.  Maybe next time!


Email ThisBlogThis!Share to TwitterShare to FacebookShare to Pinterest
Be a Fan
Posted by Tanner Llewellyn at 12:00 AM