Why Culebra? Here are 10 Reasons to visit this small Caribbean Island

One of the main reasons people go to Culebra is to do nothing.  Here are ten other reasons to visit. 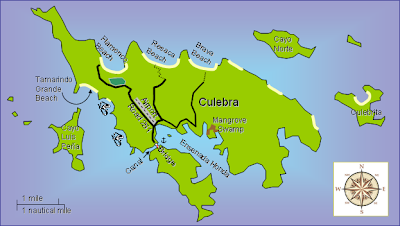 Convenience
Culebra is a small island about 17 miles east of the main island of Puerto Rico – close to the US Virgin Islands and British Virgin Islands.  But, it’s part of Puerto Rico, and for American travelers getting to PR is as easy as flying to any other state in the US.  No passport is required and you don’t have to pass through customs.  Your cell phone should work with no additional fees, they use US dollars, and most people speak English.  It’s easy to fly from the US to San Juan, Puerto Rico and from there you can either take a small puddle jumper plane to Culebra, or have a taxi take you to the ferry terminal in Fajardo.

Cost
There are round trip flights from Richmond, VA to San Juan, PR for $228.  Forget about taking a cab to the ferry (unless you’re really on a budget) because from San Juan you can “splurge” and book a flight from Isla Grande to Culebra on Air Flamenco for $70 each way.  (Make sure your flight into San Juan arrives in time to catch a flight to Culebra.  The last one leaves daily at 6pm).  With total air fare coming in at well under $400 from the mid-Atlantic it’s still cheaper to fly to Culebra than practically any other Caribbean destination, outside of mainland Puerto Rico.

Beaches
The mile long, crescent shaped, white sand, clear blue watered Flamenco Beach is consistently ranked among the world’s best.  Many visitors come just for Flamenco Beach and that’s about all they see.  There’s also Playa Carlos Resario for snorkeling, Playa Melones for snorkeling and sunsets, and Zoni Beach for a less crowded hang-out beach almost as nice as Flamenco.  Adventure seekers can hike to the secluded and wilder Resaca Beach and adjacent Brava Beach, or hire a water taxi to take you to the tiny uninhabited island of Culebrita, where the beaches and tide pools are said to be even better.  Flamenco Beach has food kiosks, camping and other amenities.  None of the other beaches do so bring water and pack a snack.

A Very Cool Bar
The laid back, waterside Dinghy Dock is the kind of tropical bar island hoppers dream of.  Crusty locals sit alongside jaded Expats and in-the-know tourists.  Island drinks like the painkiller are strong and the vibe is such that you won’t want to leave.  You can also bar hop to nearby Mamacita’s or head over to Susie’s restaurant for a great meal and to try another island drink - the bushwacker.

Accommodations
You can search all over the Caribbean, but you may not find a no-frills cottage, cabin or bungalow quite like the ones offered by Jacinto and Susie (of Susie’s Restaurant) called Casa Yaboa, located about 5 miles from Culebra's only town, Dewey.  (Rent a golf cart or jeep).  It’s not exactly cheap, but definitely worth it.  If Casa Yaboa is booked, there are several other guest houses and rentals to choose from, including Naniqui by the Bay, Casa SuMarco and Villa Boheme, but Casa Yaboa would be my first choice.

Undiscovered, Non-commercial Feel
From 1909 to 1975 the U.S. Navy used Culebra as a gunnery range and as a practice bomb site during World War II.  The military has since cleared out, but Culebra has remained undeveloped like the Caribbean of old.  There are no big casinos, no mega-resorts, no shopping outlets and no chain restaurants on Culebra.  There are very few tourist shops.  No stoplights.  There’s one gas station.  Sometimes you’ll feel like you have the place to yourself, especially if you choose a secluded accommodation like Casa Yaboa.  A refreshing change of pace.

Diving/Snorkeling
Culebra is one of the most pristine places to practice snorkeling and scuba.  A barrier reef protects some of the beaches, making for tranquil waters where you can snorkel among turtles, sting rays and other marine life.

No Cruise Ships
This one's pretty self explanatory if you've ever experienced the masses of people who get off a docked cruise ship and stroll around the immediate vicinity of the port for a few hours each day, going to touristy places designed to accommodate them.  You don’t have to worry about that on Culebra.  The closest thing is the people from the ferry going back and forth to Flamenco beach, but that’s on a much smaller, and cooler, scale.

Small Size
Culebra is only about 7 by 3 miles, so you can easily cover the whole island on a golf cart and be practically anywhere you need to be within 30 minutes.  But, you’ll probably be content to just relax in the "here and now", letting the day unfold as it may without feeling compelled to be constantly doing something or like you are missing something.

No Hassling
There's not much in the way of native culture on Culebra, and the constant hassling that can occur in other places like Jamaica just doesn’t happen here.  Crime is also not a problem.  The 2,000 or so permanent residents are mostly Puerto Ricans and Expats who have made Culebra their home since the military left in the 70's.  If you go to the pubs you might meet a few colorful local characters, but nobody is going to try to guilt you into buying a bracelet, necklace, key chain, et cetera.

Location
Did I make it clear that Culebra is smack dab in the middle of the Caribbean?  It has the same year-round warm, tropical climate of more well known places like St. Thomas without all the people.  If you’ve ever been to the Eastern Shore of Virginia, it’s kind of like that but in the Caribbean.  The landscape is dotted with scrub, cacti and coconut palms.

That's actually 11 reasons to visit!  There are lots of places worth vacationing in the Caribbean, but none seem to have the same appeal as Culebra.
Email ThisBlogThis!Share to TwitterShare to FacebookShare to Pinterest
Be a Fan
Posted by Tanner Llewellyn at 6:45 PM