Live shows by The Hot Seats always seem to come and go in the blink of an eye.  Later on you ask yourself things like, "Did they really work in a cover of Frank Zappa's Take Your Clothes off When You Dance, and if so did I interpret the song literally or figuratively?"  Or, "Did a 6'8" real life Woody from Toy Story exclaim 'We're in the spirit world now' during a blazing fiddle tune?"  Memories aren't always clear.  One can't always be sure. Thankfully now we have an officially released, professionally mixed, live recording that offers at least a snippet of an idea of what that last Hot Seats show was probably like.  Or, I suppose, how it might sound the next time you see them play, warts and all. 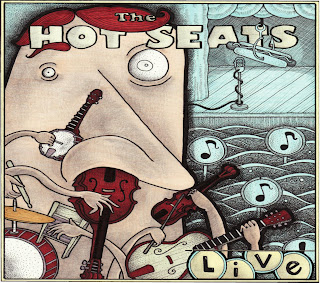 Captured at Ashland Coffee and Tea in April 2011, "Live!" features 13 songs, many of them staples of the band's current repertoire, but contains no repeats from any previous studio albums.  Long-time fan favorites such as Same Old Man, Cheesy Beef Boogie, and Dill Pickle Rag made the cut, as well as newish numbers like Mule Wife, Peaches, and River Stay Away from My Door, plus the group's completely original take on John Prine's Sam Stone that hopefully they never tire of playing.  To name a few.

Sure, anyone familiar with The Hot Seats' live sets can probably think of many great songs that aren't on here.  But this was a one shot deal...the best music they could fit into one show, recorded live, on the fly, boiled down to the cream of the crop...50 minutes of no-filler Virginia goodness.  Long overdue. Candy for the ears.

The Hot Seats: Live! is now available from CD Baby.  Get it while it's beefy cheesy!
Email ThisBlogThis!Share to TwitterShare to FacebookShare to Pinterest
Be a Fan
Posted by Tanner Llewellyn at 7:23 PM