The 9-night trip to Nova Scotia that Laura and I just took totaled over 1,000 miles of "avoid highways" type driving and included the splendid seacoast along the Southern Shore, the floral rolling hills of the bucolic Gaspereau wine region with its views of the Minas Basin, the rugged and dramatic island of Cape Breton, and much more.  Here are my top ten experiences, in no particular order:

Lunch at Le Caveau Restaurant
After stopping for a tasting of their excellent wine, we enjoyed lunch at Domaine De Grand Pré Winery's renowned Le Caveau Restaurant, considered to be among the 20 best winery restaurants in the world and certainly one of the better restaurants in all of Nova Scotia.  The restaurant lived up to its reputation and sitting outdoors on Le Caveau's garden-like patio on a warm May afternoon only added to the experience.  I opted for the Kalbi Marinated Coppa Steak with Muscat wine while Laura purchased the Big Chicken Crunch.  We parked at the viewing area for the Grand Pré historical site and rambled to and from the restaurant via the vineyard walk. 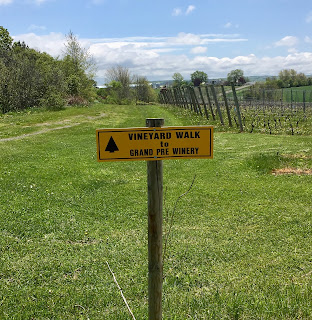 LaHave Bakery
We were one of three cars taking the LaHave Ferry on a Sunday morning.  The ferry, located off 332, crosses the LaHave River and while it does cut some driving time for those traveling along Nova Scotia's Southern Shore, one of the main reasons people take the ferry seems to be to visit the LaHave Bakery on the other side.  Turn left when departing the ferry and you can't miss it on the left along the water.  All three cars on the ferry stopped there; that includes us!  The LaHave Bakery is a hippie-ish place serving coffee drinks, pastries and scones, as well as more substantial meals.  There are benches and tables outside to linger on, plus a craft store and bookshop in the same building.
Barry Colpitts Folk Art
If you've seen the movie Maudie starring Sally Hawkins and Ethan Hawke then you know of Nova Scotia's famous folk artist Maud Lewis.  What I didn't begin to realize until a few days after arriving is how much of a thing folk art continues to be in Maritime Canada.  Late May/Early June is the off-season, so the Black Sheep Gallery wasn't open yet, but I did wake up on the 2nd to last day of our trip compelled to Google and then subsequently happy to learn that our driving route for that morning would take us right past the home of folk artist Barry Colpitts.  His work is primarily whimsical wood carvings painted in bright maritime colors and his home and shed are covered with these creations.  Barry was home when I knocked on his door and was more than happy to give us a tour of the property.  This was one of the definite highlights of the trip and I'm so glad I was able to get a little bear with a bird on his back to bring home as a memento!

Hiking to the Lookoff at the Top of Fair Alistair's Mountain in Mabou
The Cape Mabou Trail Club prints a brochure called Hiking Trails of the Cape Mabou Highlands, available for sale at the Mabou Freshmart and probably other places.  I was looking at it while having lunch at the Red Shoe Pub in Mabou when the waitress recommended the hike to the look-off on the Mabou Post Trailhead.  She gave us verbal directions to the trailhead which supplemented the description in the brochure.  It's quite a ways down a pot-hole filled gravel road so I might not have had the encouragement to make the drive there without her recommendation.  But I'm glad I persevered because once we found the trailhead the hike was a challenging yet rewarding climb to the top of Alistair's Mountain with views down to Mabou Harbour below and beyond.  The black flies on the trail were a bit pesky though.

We did some sort of hiking/trail walking every single day.  Other great hikes:  The Coastal Trail and Jack Pine Loop combo in Cape Breton Highlands National Park between Black Brook and Neil's Harbour, the Jodrey Trail at Blomidon Provincial Park, and the Bob Bluff Trail at Taylor Head Provincial Park.
Watching the Fundy Tides at Evangeline Beach
The highest tides in the world can be found in Nova Scotia on the Bay of Fundy.  At places like Burntcoat Head the tides rise and fall over 40 feet every six hours.  It's quite remarkable.  Our ocean view room at a nondescript motel next to an RV park at Evangeline Beach offered a panoramic view view of the Bay of Fundy's Minas Basin.  At low tide you can walk out several kilometers on the muddy sea floor, but at high tide the water comes up all the way to the bank and sometimes sprays over.  We saw more low-tide than high-tide due to the times of day this was happening during our two-night stay there.  Words can't describe and pictures can't convey the beauty of looking out over the Minas Basin toward Cape Blomidon from Evangeline Beach.
Walking the Labyrinth at Tangled Garden
At Tangled Garden I learned that a labyrinth is not a maze. Where a maze is intended to confuse, a labyrinth is meant to quiet and clarify. (You can't get lost in a labyrinth).  Labyrinths are ancient geometric spirals that are tuned like musical instruments to resonate at frequencies that assist one in entering the non-rational intuitive realm.  It takes about 15 minutes to walk through Tangled Garden's wildflower labyrinth at a meditative pace.  At the entrance you're supposed to quiet your mind and allow a question to form, or ask "what do I need to know at this time?"  The physical act of walking meditation balances body and spirit.  I have to admit that it was quite rejuvenating.  After walking the labyrinth and pondering the surrounding gardens we enjoyed tasting some of the delicious fruit and herb liqueurs that Tangled Garden distills.

Sipping on Nova Scotian Wine on the Dock of the Dunlop Inn in Baddeck
Baddeck is a nice little town in Cape Breton, however, there wasn't much going in Baddeck during the early season to make one want to linger in a restaurant or pub for the evening* - all the more reason to indulge in a bottle of wine like a Tidal Bay or Castel and savor it while taking in the view of the Kidston Island Lighthouse from the Dunlop Inn after a long day of touring the Cabot Trail.  If a stay in Baddeck is on your itinerary then I highly recommend staying at the Dunlop Inn.  Baddeck a perfect base for day trips to Ingonish, Cheticamp or Glenora, and the Dunlop Inn owners Carl and Jerrianne have a great little place there with unbeatable waterside views from the sunroom, kitchen, deck and dock, with lots of places to sit and relax.

*I have to retract that lack of nightlife statement a bit.  We stayed in Baddeck for two nights.  On the first night we walked in to Tom's Pizza just as musician Deron O'Donnobhain was finishing for the evening.  When I sat down he asked if we had any requests to which I replied "Have you played any John Prine songs yet tonight?" which garnered laughs from all those around because his set must have already included plenty of Stan Rogers and John Prine songs.  He then chose to sing Knockin' On Your Screen Door (!) - the first song on the brand new John Prine album.  It was great to hear this!  Freshy fresh.

Watching a Sea Gull Try to Catch Fish on the Liscomb River
We arrived at the Liscombe Lodge on the only rainy day of our trip and discovered that the cabin/chalet we were staying in was the perfect place to spend a cold, drizzly day in rural Nova Scotia.  The Eastern Shore of Nova Scotia is not quite on the tourist map in the same way as the South Shore, Bay of Fundy or Cape Breton are, but nonetheless it offers an impressive highland landscape and coastal views aplenty along roads that are almost completely devoid of other cars.  Soon after settling in to the cabin we noticed a tenacious sea gull determined to catch fish on the river that rolled by before us.  About once an hour it might be lucky enough to catch a fish, but it couldn't fly with the fish in its mouth, it couldn't swallow the fish whole, and it wasn't smart enough or equipped with the proper talons to tear into the fish and eat it that way.  Every fish it caught would ultimately escape much to the frustration of this single-minded bird.  All the while a clever crow appeared to be eating fish galore.  Mr. Sea Gull was still hunting as the sun went down and there again perched on the same rock among the river rapids as the sun came up the next morning.  He's either onto something or not quite right in the head.
Moose Sighting Along the Cabot Trail
We did the Cabot Trail counter clockwise and on the western side during one of the few straightaways between French Mountain and Cheticamp I spotted a moose far off in the distance eating grass along the left hand side of the road.  Unfortunately a car coming the other way also spotted the moose and was stopped to take a picture just as we were passing by which may have spooked it so we weren't able to get a photo.  It was great to see a moose though, and thankfully we didn't encounter any bears or coyotes on any of our hikes or leg stretches.  The image below will have to do. 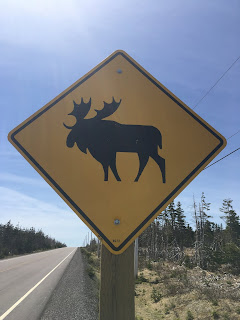 Distillery Tastings at Ironworks and Steinhart
The folks at Ironworks Distillery in Lunenburg could not have been more friendly or generous with their tastings.  There must have been 15+ spirits to choose from!  I didn't try them all but the ones I did taste were all very good, especially the blueberry and rhubarb liqueurs and the limited edition Shipwrecked Rum Boat rum!  Similarly, the tasting we did at Steinhart Distillery near Arisaig was a fun time.  Steinhart is a welcome sight along the scenic yet remote stretch of road numbered 245 and 337 on the Sunrise Trail.  Steinhart is about 30 minutes from the nearest town - Antigonish - but well worth the visit.  Their Maple Vodka was yummy.

***
Email ThisBlogThis!Share to TwitterShare to FacebookShare to Pinterest
Be a Fan
Posted by Tanner Llewellyn at 11:48 AM