What Sound Does A Painting Make?

Where do artforms overlap?  Where does music (a sound art) meet up with visual art?  To me, a Jackson Pollock drip painting sounds like Ornette Coleman's The Shape of Jazz to Come, and vice versa.  On the contrary, the spectral, gliding paintings of Mark Rothko evoke the slow-build ambient works of Brian Eno, like his Music for Airports. 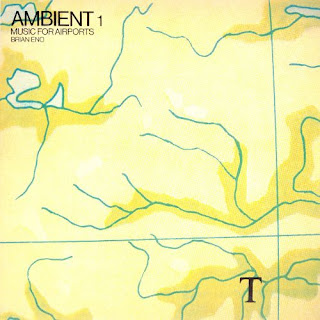 Other things come to mind.  The Bill Frisell album Richter 858 - featuring Eyvind Kang, Jenny Scheinman and Hank Roberts - was composed of music inspired by the paintings of German artist Gerhard Richter.  That came out sounding like modern chamber music. Frisell also famously wrote music to accompany the black and white photographs of Mike Disfarmer - an obscure, eccentric  portrait photographer in Heber Springs, Arkansas who died in 1959.  For the Disfarmer themes Frisell was in an Americana mindset.

I used to go see hippie bands like Sound Tribe Sector 9 who often had a visual artist on stage with them creating paintings in the moment inspired by the music unfolding in front of the audience.  This bleeds into a lot of related areas.  Poster art.  Album cover art.  Soundtracks to films.  Phan art. John Cage's music looked like his art.  His art sounded like his music.  What about Mark Tobey?  Or Janet Sobel?
Free jazz, as it is called, requires lots of discipline.  It's not just random notes.  Not always at least.  Same with abstract art.  I recently asked a painter of landscapes if he ever works in an abstract style and he said "no, it's too scary, too difficult".  Some say the best abstract art is more than just splattering a canvas.  Of course, it doesn't have to be.  Abstract art is my favorite kind of art, but I don't limit my appreciation to just human made pieces.  I'm also a fan of elephants, pigs and chimpanzees who work in that medium.  Nature works in this medium as well.  Look down at the street you're standing on, or zoom way in on a dog.  It can be completely random.  That's what I happen to love about it.
People say stuff like "I'm tone deaf, I could never be a musician".  To those people I say go bang out some notes on the piano.  Right now.  Right, now.  Very good, now you are a musician.  Or at least a soundician.  Keep doing it every day.  More sounds will come out.  Monkeys will type.  Maybe make a painting that sounded like the music you just made.
Kids make good artists because they have fewer internal barriers preventing the muse from whispering.  Who's to say that a child's scribbling is any less artsy than something hanging in a gallery?  Sign the Mona Lisa with a spray can, call it art.

Email ThisBlogThis!Share to TwitterShare to FacebookShare to Pinterest
Be a Fan
Posted by Tanner Llewellyn at 10:08 AM