Field Recordings from the Seychelles Islands

My discovery last year of the Etcetera String Band's Bonne Humeur album of early Creole/Caribbean dance tunes from Louisiana, Haiti, Trinidad, Martinique and the Virgin Islands whetted my appetite for this kind of music.  These are basically fiddle tunes of the sort I am already familiar with via my playing of Irish and oldtime, but with a tropical and exotic, "islandy" Afro-Caribbean twist to them.  I've been in search of more music like this and may have just found some by virtue of an album of late 1970's field recordings from the Seychelles; tiny islands in the Indian ocean.

The LP is called Seychelles 1: Danses et Romances de l'Ancienne France by a group called the Anse Boileau Kamtole Band.  I'm not quite sure what it'll sound like as I have only been able to sample one track online.  It is described by Keith Chandler from Musical Traditions as "archaic dance music, originally performed in England and thence throughout the European continent during the eighteenth century, filtered through the vernacular tradition and transformed beyond all recognition into something truly spectacular".  The instruments are listed as being fiddle, guitar, accordion (or melodeon), banjo-mandolin, bass drum with cymbal and triangle. 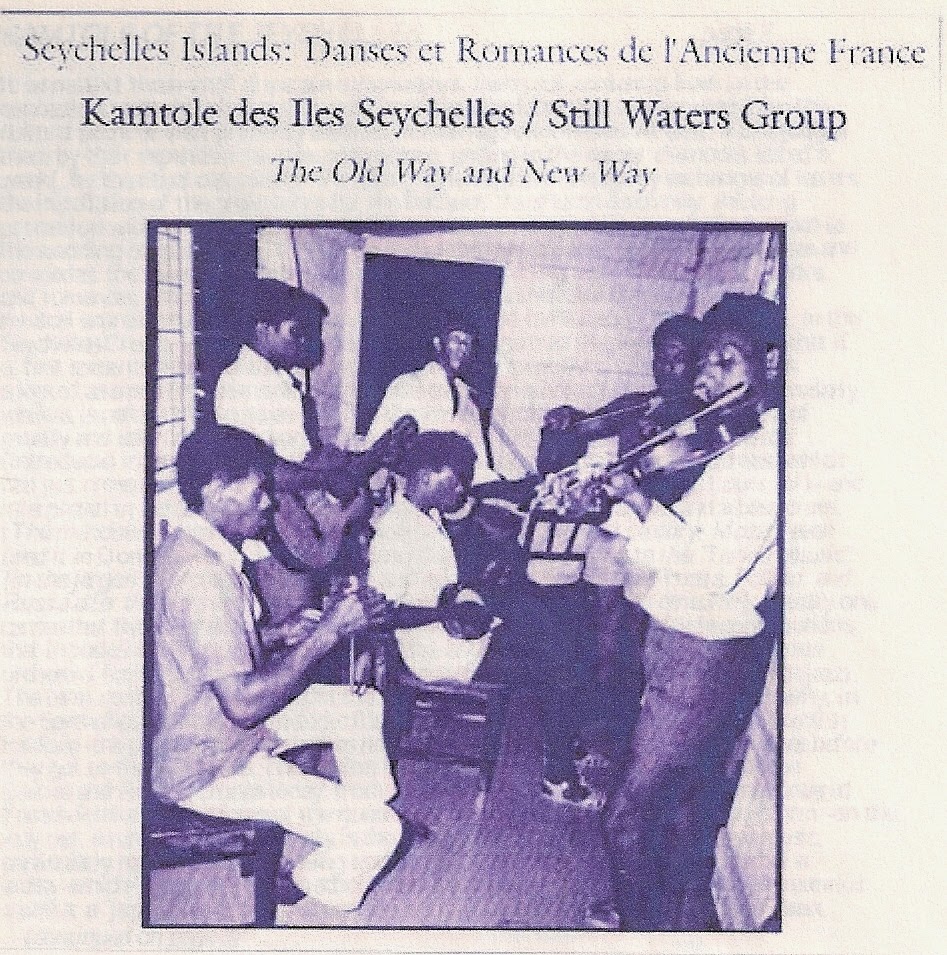 In his book Primacy of the Ear, Ran Blake talks of the benefits of learning an artist's overall work.  This might be a jazz player learning all of Monk's tunes, an Irish musician memorizing O'Carolan's pieces, or a guitarist in a Dead cover band ingesting all of Jerry's repertoire.  Myself, I've been going through Bonne Humeur tune by tune and hopefully the music on this Seychelles recording will have the same appeal.  One roadblock is it's being mailed to me as a vinyl album, which I have no means of playing, so I'll have to find someone with a record player and digitize the audio.  Then, hopefully, the music will be worth learning.

This is getting into some obscure territory - instrumental dance tunes with a Creole, Caribbean or island flair - so each new discovery is treasured.  If you know of more music like this - even modern artists who are creating original works in this style - please let me know because I would be interested in hearing it.  Sonny Rollins wrote a tune called St. Thomas which has this same kind of feel, so learning about more jazz tunes with a Caribbean melody would be something I'd be very open to as well.  Thanks!


Email ThisBlogThis!Share to TwitterShare to FacebookShare to Pinterest
Be a Fan
Posted by Tanner Llewellyn at 12:28 PM