Dawes Nothing is Wrong review 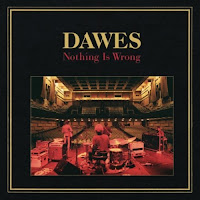 My first listen to the new Dawes album Nothing Is Wrong must have been on a good day because it hooked me right away.  I wasn't bothered by any of the things that initially kept me from loving their debut album:  chorus heavy songs, pitch-perfect harmonies, excellent but safe musicianship, and overly heartfelt lyrics. (Hey - it worked for the Jayhawks).

All those characteristics are still there - things which could have been negatives to me - but I've come to realize that these are the things that make Dawes' music so endearing, on both the first album and this newest one.  It's easy to wrap yourself in Dawes' carefully crafted song structures once you are confident that not a single lyric, note or solo is going to do you wrong.  In a much cooler world, this would be what you hear on easy-listening, light rock radio stations.

While I did agree that their debut album North Hills had the feeling of an "instant classic", I didn't give in to its laid-back late 70's California sunshine until I could hear the follow up.  There is no question that North Hills will age well, but now that we can put it up against the bolder, more fully-formed sophomore record Nothing Is Wrong, it's worth speculating that that perhaps Dawes is no fluke but rather an increasingly important facet in today's contemporary musical landscape.  Frankly, my mind is chock full of favorite bands and musicians...it's pretty packed in there and I don't have a strong desire to let new stuff in, especially something that is not tried and true.  But somehow, because of this album, Dawes the band has found some real estate in that head space.

One of the things I like the most about the Dawes sound is that it exists outside the trappings of today's indie rock.  Some people like to compare them to Jackson Browne or Tom Petty.  I never listened to those guys much so I don't have that point of reference.  To me it occupies the same void as early Grateful Dead albums - the studio work from American Beauty through say, Mars Hotel.  It has that vibe, if you can dig it, which is a lofty comparison to make.

Simply put, Dawes are tasteful, mature musicians who know how to keep things simple, with an eye toward a greater arc than what's currently hip or trendy.  Nothing is Wrong could pass for that overlooked vinyl album from your uncle's record collection; some band from 30 years that you'd heard was good but never got around to listening to.  But it's not that.  It's new and yours to discover and be one of the first to experience  for yourself.  After time spent listening little details and nuances might start to emerge: that jammed out segment at the end of Fire Away jumps out at you in a way it never did before, for example, or some lyric in a song like So Well will really hits hard, and you'll be ready to let this be another of your favorites, as I have done.
Email ThisBlogThis!Share to TwitterShare to FacebookShare to Pinterest
Be a Fan
Posted by Tanner Llewellyn at 1:01 PM