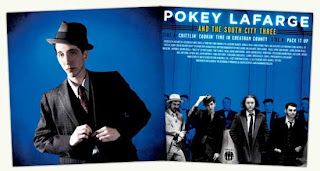 Pokey is a traveling roots musician from St. Louis. He’s been spreading the American music traditions of early jazz, string ragtime, country blues and western swing since he was a teenager, and has performed throughout the USA, the UK and Denmark. The 2010 release Riverboat Soul by Pokey LaFarge and the South City Three won “Best Americana Album” at the 10th annual Independent Music Awards. (It also made my best of 2010 list!). So far this year Pokey has released a vinyl single on Jack White’s Third Man Records, yes "that" Jack White (it was produced by Mr. White himself). An upcoming full-length album titled Middle of Everywhere is due for release this summer.

I should also mention that Pokey's hand-picked backing band The South City Three consists of some amazing players, especially Adam Hoskins on guitar. Don't miss this opportunity to see this band in such a small and intimate venue! For tix or more information, visit http://www.thecamel.org/.
Email ThisBlogThis!Share to TwitterShare to FacebookShare to Pinterest
Be a Fan
Posted by Tanner Llewellyn at 12:18 PM