I recently happened upon a recording of fiddle-based music called The Gu-Achi Fiddlers, Old Time O'odham Fiddle Music, Volume 1. It is available on Canyon Records, a small label devoted to Native American music. Despite a cover photo which makes it look much older, I believe this music was recorded in the 1980’s so the audio quality is much better than one might expect. 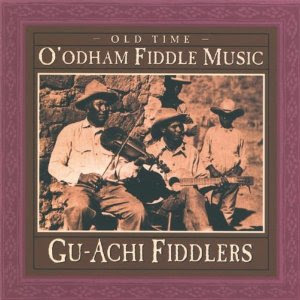 The Gu-Achi Fiddlers hailed from the Southern Arizona town of Gu-Achi in the Sonora desert. They belonged to the Tohono O'odham Nation, formerly known as the Papago. They were led by two fiddlers, Elliot Johnson and Lester Vavages, and backed up by Gerald Leos Sr. (snare drum), Tommy Lopez (bass drum) and Wilfred Mendoza (guitar). All of those guys play on this release.

The music here is a melting pot of Native American, Mexican and European styles: schottisches, polkas, two-steps and mazurkas filtered through the indigenous melodies of the O'odham. The fiddle tradition of Southern Arizona dates back to the days of Spanish colonization, when Catholic missionaries introduced the Native American Papagos to their European instruments and tunes. The Papagos quickly adopted the instruments and absorbed the rhythms, giving birth to a form of old-time fiddle music that is uniquely Southwestern, a tradition that has survived until today.

There is a refreshingly un-polished energy to this “scratchy” and slightly out of tune music...the players rely more on attitude and enthusiasm than any sort of technical virtuosity. It turns out this is a style of music I had been wanting to hear, I just didn’t know it until I heard it! Not quite polka in the German sense, not quite Mexican, and definitely not the same as old-time Appalachian fiddle music. I encourage anyone with an interest in traditional or indigenous music to check this out. It’s guaranteed to put you in good spirits! (If you are a musician try playing some of these tunes - you'll love 'em!)
Email ThisBlogThis!Share to TwitterShare to FacebookShare to Pinterest
Be a Fan
Posted by Tanner Llewellyn at 4:22 PM