Who Else Can They Get For LOCKN'?

Phish, Ween and My Morning Jacket.  Independently, these are probably my top 3 active, performing rock bands, and they are all playing this August at Lockn', a music festival in Virginia that takes place about 90 minutes from where I live.  I've never been to Lockn' before but I have to go now.  Is Yim Yames going to sit in with Ween on Homo Rainbow?  One can hope. 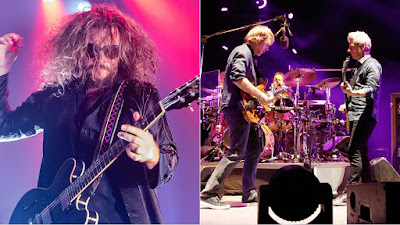 Even if they don't add any other performers it would be enough for me, but the website says "More Artists To Be Announced".  I wonder who those could be?  What other artists would be a good fit for that festival and also be on the top of my personal list the way those big 3 are?  Since I'm 3 for 3 already, maybe I'm not that far off base, so I might as well think of some more preferable add-ons to the lineup.

I'm not clamoring for Dead and Co., or Ratdog, or Bisco, or Widespread or String Cheese (or any of your token classic rockers that Lockn' alumni might be bummed about missing), and I'm no longer into the bluegrass-tinged acts that show up at places like this.  My tastes run a little different than the typical jamband route, despite the fact that the 3 headliners happen to be tailor made for me.  What I would dig is the inclusion of Camper Van Beethoven or The Meat Puppets...a couple of out there, underground 1980's bands that don't normally play festivals like this but who could sneak in on the Ween vibe.

Someone who would pair well with My Morning Jacket is John Prine.  The singing mailman ain't that jammy, but his songs come from a deceptively counter cultural perspective.  This wrinkly living legend would definitely charm the crowd and be a nice break from your standard everyday funk grooves.

Tortoise could play late night after Phish and melt the faces of anyone brave enough to listen; and Marc Ribot and the Young Philadelphians featuring Mary Halvorson would hoist a heaping helping of noise in the guise of classic soul.  But I doubt either of those are gonna happen.

More within the realm of possibility are modern rockers like Dr. Dog or Dawes.  Even though I like both of these bands, I'm not sure how excited I would be to see them in that setting.  What would get everyone off - and still be a great addition to the lineup - would be a Talking Heads reunion.  Talk about a ground score.  That would really light things up.  Or how about Tom Waits?  He would add a different type of trippyness to the happenings.

Lockn' could go really, really big and court the likes of Springsteen, U2, Pearl Jam and the Stones, but that might be getting too far removed and mainstream.  Let Bonnaroo do stuff like that.  Or they could go more grassroots in the vein of Floyd Fest, Shakori Hills and Red Wing Roots.  No, I happen to like them right where they are this year - with a finger on the pulse of bands with a certain throbbing psychedelic sensibility who still bring the heat rather than a nostalgic shuffle beat.  So hey, what about Prince?!


Email ThisBlogThis!Share to TwitterShare to FacebookShare to Pinterest
Be a Fan
Posted by Tanner Llewellyn at 10:36 PM