Uniting the Old-Time Jam and the Irish Session

As of April 2012 our 1st and 3rd Saturday morning Old-Time Jam and Irish Session will now be held at Ashland Coffee and Tea, 100 North Railroad Avenue, Ashland, VA 23005. Merging an old-time jam with an Irish session is not as hard as it may seem...

Focus on similarities; be mindful of differences
Both traditions involve friendly, enthusiastic folks gathering to play mostly instrumental tunes in unison using a variety of melody, rhythm and percussive instruments.  Unlike jazz or bluegrass, individual instruments rarely take "breaks" or solos.  Instead, as mentioned before, everyone plays in unison with limited  variation/ improvisation.  Both the old-time jam and the Irish session are (usually) open formats and everyone is welcome to participate.  However, for purists used to one or the other, certain compromises may have to be made.

Keys
The mechanics of certain traditional instruments limits the number of keys one can comfortably play in. So, with a few exceptions, both Irish and old-time center around tunes conceived in the keys of D, G or A and their modal/minor cousins.  Since most old-time banjo and fiddle players re-tune to get into different keys, old-time jams will typically stay in one key for a while (we try to do this).  This differs from an Irish session, where sets of tunes may jump from one key to another.  Those used to the key-jumping format of Irish trad should take heed of any instruments present that may not allow for this or you risk perturbing that overly sensitive clawhammer banjo player!

Tunes
In old-time music the types of tunes played tend to be in 4/4 time (reels, breakdowns, hornpipes, marches, two-steps), whereas in Irish music you have all of those tune types plus the welcome addition of jigs in 6/8 time, the elusive 9/8 slip jig, and polkas.  For an old-time musician, playing jigs can be a challenge, but it is also a lot of fun!  The occasional slower tune in 3/4 time (often called a waltz or mazurka) can find its way into either format.

Repetitions
At an old-time jam one tune will usually be repeated many times through (at least 5 times but who's counting?) so that everyone can get into a nice groove and to help those unfamiliar with it learn it.  At an Irish session tunes seem to be put to bed after just three times through or strung together with other complimentary tunes to form a set.  However, the extended repetition approach to one tune can also be applied to Irish traditional music where it can bring out the sometimes overlooked mystical qualities of the melody.

Instruments
In both traditions, each instrument used has a role - be it melodic, percussive or rhythmic - with single-note melody instruments taking the lead.  In old-time Appalachian the primary instruments are fiddles, 5-string banjos and guitar, along with dulcimer, bass, mandolin, autoharp, banjo uke, washboard and spoons/bones.  In Irish traditional music the primary instruments are fiddle, tinwhistle, uilleann pipes, flute, concertina, button accordion and 4-string banjo, along with bodhran, guitar, mandolin, and bouzouki/octave mandolin.  Other more "exotic" instruments such as cajon and harmonica might also be acceptable assuming the player is familiar with the music and understands his or her role.  At our Ashland jam, any combination of the above mentioned instruments is fine, so long as there's a strong foundation of melody.

Playing by ear vs. using sheet music
The music we are playing is part of an aural tradition.  Participants are encouraged to learn and play by ear as much as possible.  I will occasionally still pull out the tab if I'm called upon to lead a tune that I haven't fully ingested, but I'm trying to do that less and less as time goes by.  I encourage you to do the same.

Etiquette
The old-time and Irish tradition involves specific tunes in specific rhythms, played in specific ways in specific keys.  It's not a free for all where musicians improvise arrangements or solo over chord changes.  The most important thing is to show respect for the other players and to listen. Bring a list of common tunes you can play, sorted by key so that when you're called upon to suggest a tune you'll have some choices.  Feel free to ask someone else to lead a tune if you are not ready to do so.  Keep track of the tunes played that you don't know and work on some of those for next time.  By all means participate!  Feel free to play quietly until you are comfortable.  Don't spend too much time worrying about what others think of your playing, chances are they are more concerned with what they are doing than what you are doing. 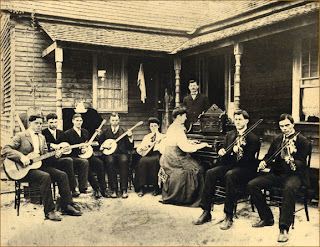 Won't you join us?!
Email ThisBlogThis!Share to TwitterShare to FacebookShare to Pinterest
Be a Fan
Posted by Tanner Llewellyn at 1:03 PM